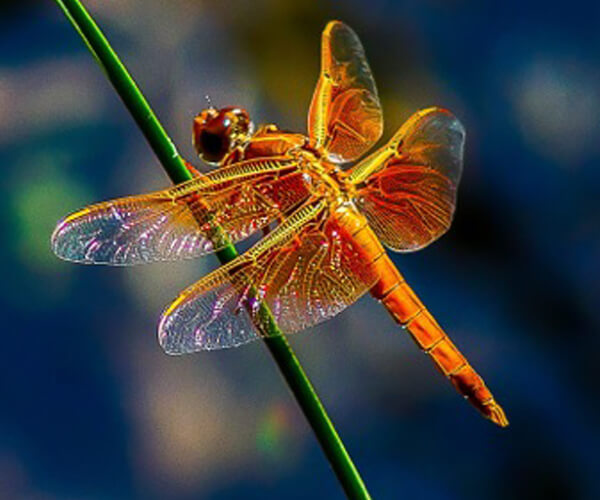 Mary T. Hercher is an enrolled member of the Oglala Sioux Tribe. Born in Kadoka, South Dakota, Mary was raised in the Black Hills region. She holds a Master’s degree in Curriculum and Instruction from South Dakota State University. After retiring as an educator, she now lives in Black Hawk, South Dakota, where she pursues her photography career.

Mary began taking photographs at the age of 12 when she received her first camera as a birthday present. Over the years she has dedicated much of her time to studying the elements that make up an exceptional photograph. She draws inspiration from the family photos received from her grandmother and from her surrounding natural landscapes. Mary enjoys taking photographs of places, plants, and animals that are culturally significant. She took her first photography class in 2002 and began to undertake photography as a serious endeavor in 2012. Using a Canon 7D, along with a variety of lenses, her photographs capture contemporary aspects of the natural world. Most of her photographs are taken in western South Dakota. Her love of the land and sense of connection to the Badlands, Black Hills, and surrounding prairies enhance the themes and quality of her work, which have appeared in art museums.

In 2014 her artwork was exhibited in the Dahl Arts Center’s Mountain Art Show, and at the Gathering of People, Wind, and Water in Rapid City, South Dakota. In 2014, her image “Flame Skimmer” was also featured on a South Dakota winery label. 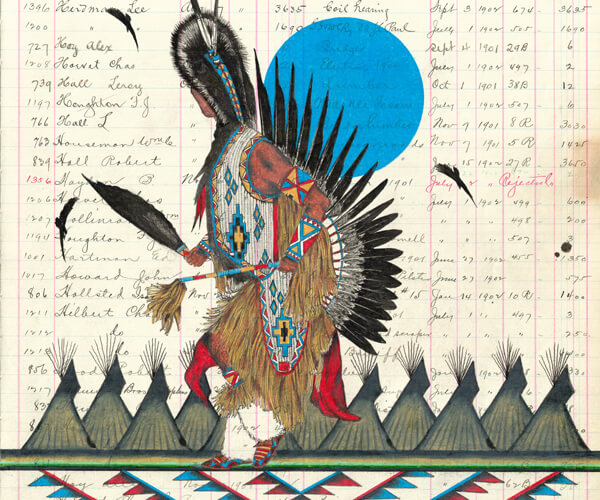 Evans Flammond, Sr., an enrolled member of the Rosebud Sioux Tribe, is a skilled artist and craftsman.  Born in Rosebud, SD, and raised on the Rosebud and Pine Ridge Reservations, he now lives in Oglala, SD, with his family. Evans has two sons, Evans Jr. and Edward, who are also exceptional artists and aspiring musicians.

Inspired by the Northern Plains Native arts, Evans began producing imaginative drawings at the age of seven.  As his talent and creativity grew and matured, Maynard Barker, a Santee Dakota mural painter and Evans’ uncle, encouraged Evans to turn his drawings into paintings. Influenced by nature and a love of the outdoors, his techniques and ideas evolve with the creation of each new artwork. Working with a variety of media including ledger art, metalwork, and hide painting, Evans seeks to portray Lakota art as adaptable and innovative as he draws from designs of the past. While portraying traditional themes, he adds a modern twist through the use of vibrant colors and detailed designs to make his art stand out in art exhibits. 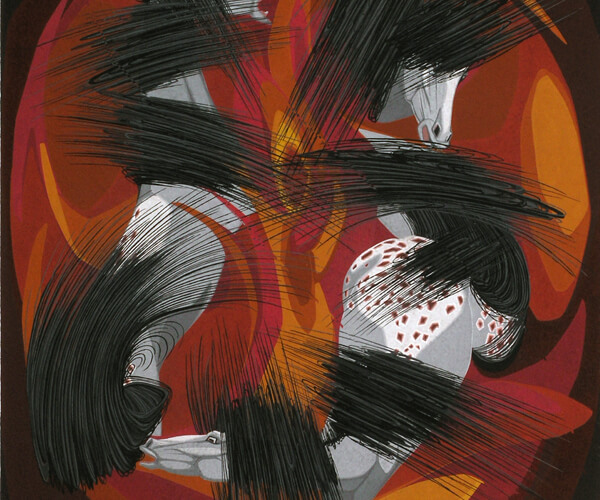 Recognizing 100 years of Howe’s impact on art and how he broke the barrier of traditional American Indian styles.

Born on May 13, 1915, Oscar Howe grew up in poverty on the Crow Creek Indian Reservation in South Dakota and was taught the rich traditions of his Dakota heritage through his grandmother’s colorful stories. These stories came to be the lifelong themes for his art.

Howe’s first major commission came in 1940, when he was hired by the Works Progress Administration (WPA) to paint a mural at the Mitchell City Library and then a series of ten murals in the Mobridge City Auditorium shortly after. A few years later in 1948, Howe was then commissioned to create a series of murals for the Corn Palace in Mitchell, South Dakota and would continue to create new murals for the Corn Palace annually until 1971.

In 1957, Howe joined the faculty of the University of South Dakota as an assistant professor of art. Howe would spend the next 25 years at USD, where he had a profound impact on future generations of American Indian artists such as Robert Penn, Herman Red Elk, Donald Montileaux, and Arthur Amiotte. It was during this period of time that Howe was named South Dakota Artist Laureate and reached his apex of development as an artist, producing many of the works seen in art exhibits that are recognizable as distinctly Oscar Howe.

After a lengthy battle with illness, Howe passed away in 1983 and was buried in Vermillion, South Dakota.

Howe used bold colors, shapes, and movements in his paintings that are vibrant in an art museum to honor and tell the stories of his culture. It was primarily through Howe’s efforts that it became acceptable for Native American artists to break away from traditional American Indian styles to other artistic styles.

Howe’s goal was to express truths through his paintings that were deeply personal to him and his people.

“What I hope to accomplish in my painting is satisfaction in content and form with completeness and clarity of expression, and to objectify the truths in Dakota culture and present them in an artistic way.” 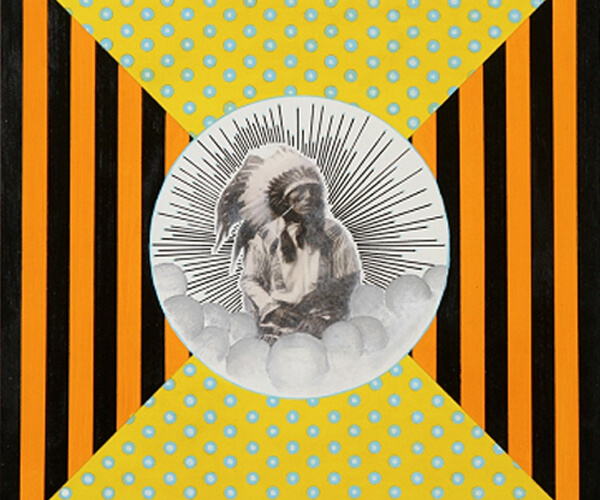 Paul High Horse, an enrolled member of the Rosebud Sioux Tribe, is a skilled painter and mixed media artist. The son of Bryant High Horse and Sara Margery Horse, Paul was born in Neptune, New Jersey. At the age of three, Paul’s parents relocated to the Pine Ridge Reservation in South Dakota so that their children could be immersed in their native culture. He lived on the Pine Ridge Reservation until he left to attend Creighton University in Omaha, Nebraska, where he completed both a Bachelor of Arts in Visual Communications and a Master of Education degree. Paul currently lives with his family in Fort Calhoun, Nebraska, where works full time as a secondary school art teacher and an artist.

Art has been an important component of Paul’s life since childhood. It was not until 2008, however, that he began concentrating on the creation of his own artwork and sharing it with a public audience in art exhibits and at art museums.

Inspiration for Paul’s artwork comes from the symbols, traditions, and values inherent in Lakota culture.  Circles are a common visual element in Paul’s paintings due to the prominence of the circle in Lakota art and culture. Paul uses a variety of media in his work including acrylics, archival inks, and watercolors.

Many of his pieces are executed on wooden panels, but he also uses canvas and paper as media for his artwork. His art incorporates a modern approach to the rich historical context of the Lakota people.

Paul has received several awards for his work, including Best Emerging Artist at the 2014 Gathering of People, Wind, and Water, A Native art market and cultural celebration, in Rapid City, South Dakota, and Best Two Person Show at the 2014 Omaha Entertainment and Arts Awards in Nebraska. This art exhibit marked the first display of Paul’s artwork in an art museum setting. 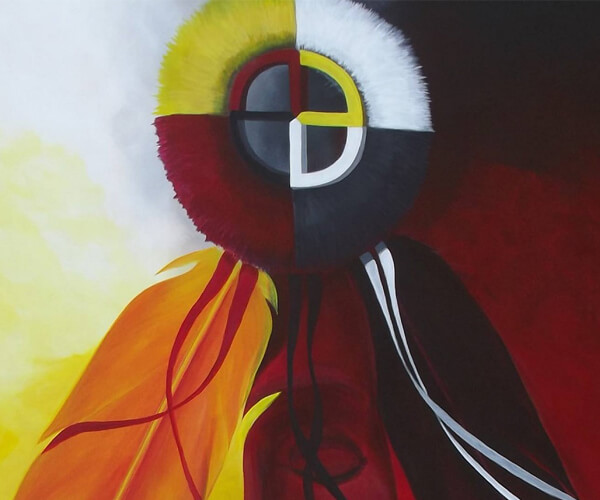 Wesley May, an enrolled member of the Red Lake Band of Chippewa Indians, is a talented painter and muralist. Born in Minneapolis, Minnesota, Wesley now resides in Bemidji, Minnesota, where he works full-time as an artist. Wesley began his artistic career at the age of six, when he began to imitate the drawings of other family members. As a teenager, Wesley began to expand beyond drawing into the realm of painting.  Through experimentation and self-discovery, Wesley developed his own unique style of painting over the next several decades.

The first step in Wesley’s creative process is to draw a sketch of a subject that inspires him. He begins with a single line, and then carefully adds additional lines in order to gradually build shapes and forms. Once the drawing is complete, Wesley selects a small vignette from within the larger drawing that will become the subject of the painting. He then applies paint to canvas and begins to create the painting.   Using acrylic paints, Wesley works in a freehand style, without the use of underdrawings. The final product is a striking image of flowing lines and bold colors embodied with deep meaning.

Inspiration for Wesley’s work comes from his spiritual beliefs as well as from the individuals who have influenced his life. The four colors of the medicine wheel are an important component of Wesley’s paintings, intended to demonstrate both the beauty and simplicity found in both life and art. He believes that there are no mistakes in art and through live painting demonstrations at art museums Wesley encourages others to create their own artwork and push their artistic boundaries.