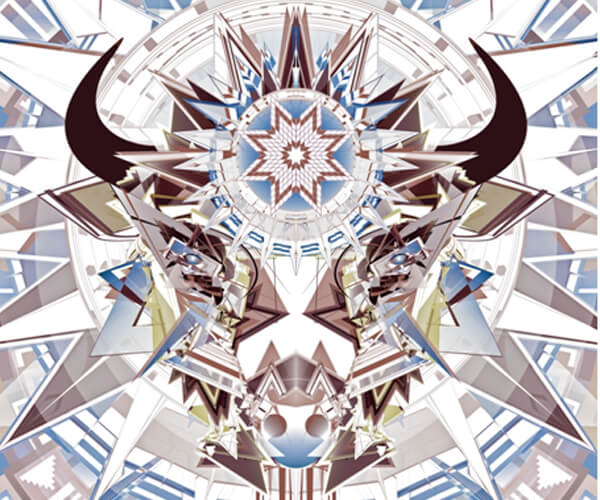 Marlena Myles, an enrolled member of the Spirit Lake Dakota Tribe, is a multifaceted artist who works in both traditional and digital formats. She is a graduate of Central High School in Rapid City, South Dakota, and currently resides in St. Paul, Minnesota, where she works as a graphic artist and website designer.

Early in her career, Marlena worked primarily in traditional charcoal drawings and portraits. Over time, she evolved as an artist and her work now focuses primarily of digital vector drawings. These drawings are built on a geometric pattern of vibrant but distinctive colors resulting in jewel-like scenes. Her artistic process is organic and fluid.  Images seen in both dreams and the world around her often provide the initial inspiration for her virtual artworks. From these visions, she then creates unique patterns and designs that form the basis of the vectored illustration. These patterns are digitally manipulated into shapes that represent animals or people. The unique layering of shapes and forms is a proprietary technique that Marlena developed herself through trial and error. Although Marlena is primarily a self-taught artist, she is part of an international art collective in which artists share new techniques and ideas with each other.

Inspiration for Marlena’s work comes from her Dakota ancestors and language. She believes that art is a means of sharing cultural awareness through a medium more powerful than the written word. Marlena hopes that her art will bring joy to the art exhibit viewer and inspire Native youth to connect with their past to create a future that is alive and embodied with traditional cultural values. 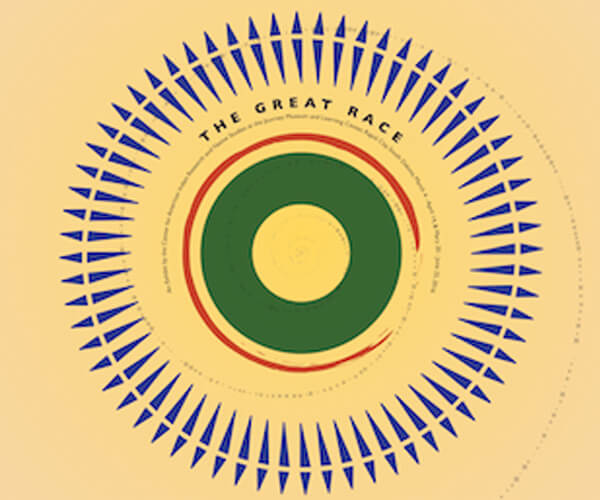 Long ago, there was a great race between the four-leggeds and the two-leggeds. The purpose was to determine which of the two groups of contestants would have precedence over the other. One unintended consequence of the race was that the Black Hills were caused to come into being.

The exhibit focused on the short narrative of the race by James LaPointe (Oglala Lakota) that is in his 1976 book, Legends of the Lakota.

‘The Great Race Exhibit’ divided the 1,218 word narrative into eight vignettes. Each vignette was interpreted or illustrated by four types of artworks -- 2-D artwork, 3-D artwork, a poem, and a musical score or song. These eight vignettes recounted the Great Race narrative using LaPointe’s words, along with artworks by 32 contemporary Lakota artists: eight poets, eight painters, eight musicians, and eight 3-D artists. Eighteen of these artists are residents of South Dakota, whereas the other fourteen live all across the United States, from Oregon to New York, and Arizona to North Dakota.

This innovative art exhibit featured its very own soundtrack and each vignette reception was hosted and sponsored by a community organization from Lakota Reservations and the Rapid City area.

This art exhibit was brought together in collaboration with the Center for American Indian Research & Native Studies (CAIRNS) and featured in select art museums. 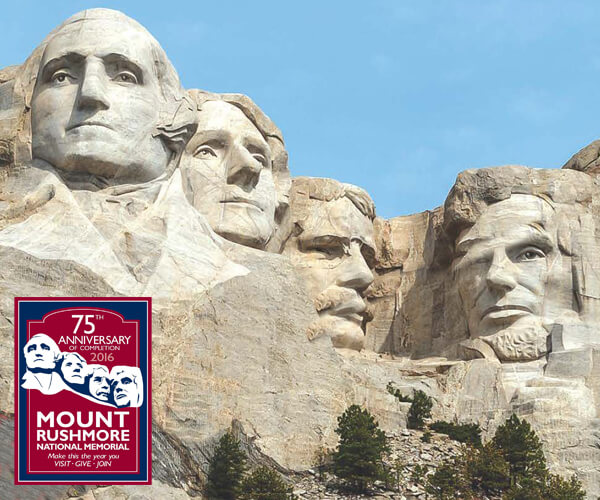 Celebrating the 75th Anniversary of Completion of Mount Rushmore

This art exhibit showcased the connections between the Rapid City community and the carving of Mount Rushmore National Memorial, as well as the Innovation and Creation of the sculpture that was intended to inspire travel and visitors.

From the ideas of a State Historian, into the hands of master sculptor Gutzon Borglum, through the trying times that were persevered, we revealed the connections of our State and our Community’s roles in prevailing to create what is now our Nation’s Shrine to Democracy. We uncovered the connections and stories often not told or seen and expanded on them while paying tribute to all that transpired to make it possible.

The art exhibit was sponsored by the Mount Rushmore Society in partnership with the Journey Museum & Learning Center, Minnilusa Historical Association, and the National Park Service in recognition of the 75th anniversary of the completion of Mount Rushmore. 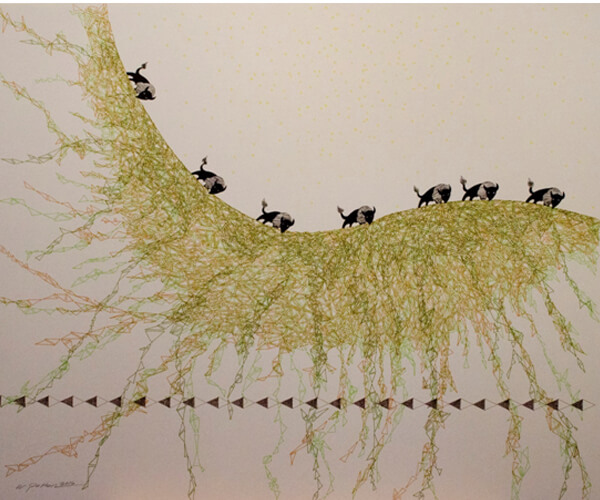 Wade Patton is a contemporary Oglala Lakota artist who provides a new perspective on Native arts for audiences. Born on the Pine Ridge Reservation and raised in Rapid City, South Dakota, Wade grew up with an appreciation for the arts and culture that surrounded him. As a child he naturally gravitated to art, preferring to draw rather than play outside. After receiving a BFA from Black Hills State University, Wade left South Dakota to pursue his artistic career in Boston, Massachusetts. He spent over a decade in Boston developing his craft as well as working as a professional art framer. Wade recently returned to South Dakota, where he now works full-time as an artist.

Although Wade is best known for his oil pastels and ledger art, he explores a wide variety of media in his work, including ceramics, quilting, and painting. One of Wade’s signature subjects is clouds, which often find their way into both his ledger art and pastels. While these clouds invoke imagery of the Great Plains skies, in actuality, they were inspired by the views from the Boston framing gallery where Wade worked for many years.

For this art exhibition, Wade has continued to expand his reach and vision, creating unique works with the intent of breaking out from the style of his earlier art. The subject matter for these works center around traditional Lakota cultural themes: bison, dragonflies, and the six-pointed star. These themes have been given a modern interpretation, influenced in part by a recent trip Wade made to Boston, and his exposure to other contemporary artists. Through the use of layering, Wade has created vibrant drawings that build on geometric shapes to create fluid and dynamic images to showcase in an art museum. 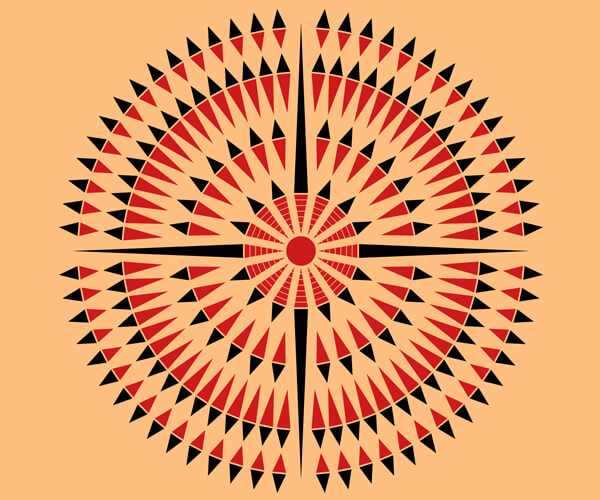 Artworks by 16 contemporary Lakota artists illustrate the short narrative titled, "How the Lakota Came Upon the World".

This innovative exhibit focused entirely on the short Lakota emergence narrative title, “How the Lakota Came Upon the World.” The art exhibit divided the 1,251-word narrative into 16 “passages” and paired each passage with an outstanding example of a practical or artistic Lakota object. The selected objects were from the Sioux Indian Museum (one of the three Indian Arts and Crafts Board museums in the United States) and The Heritage Center at Red Cloud Indian School. They spanned a period of time from before the Fort Laramie Treaty, all the way to the early 1970s. All of the objects were created by Lakotas and were collected from within the boundaries of the 1868 Treaty, including what are now Pine Ridge, Rosebud, Cheyenne River, and Standing Rock reservations, as well as the community of Rapid City.

In addition to the passages and art museum objects, original artworks by distinguished and emerging contemporary Lakota artists were featured. They creatively interpreted the passages and art museum objects from a contemporary Lakota point of view, thereby creating what we call “vignettes”. These 16 vignettes thus recount the Lakota emergence narrative in written words, museum collections, and contemporary artworks, illustrating that the emergence narrative continues to be a source of creativity and that the place of emergence in what is now the Black Hills was and always will remain a site of special significance in Lakota cosmology.

This art exhibit was brought together in collaboration with the Center for American Indian Research & Native Studies (CAIRNS).