Wild Blue Yonder - The Story of Ellsworth Air Force Base 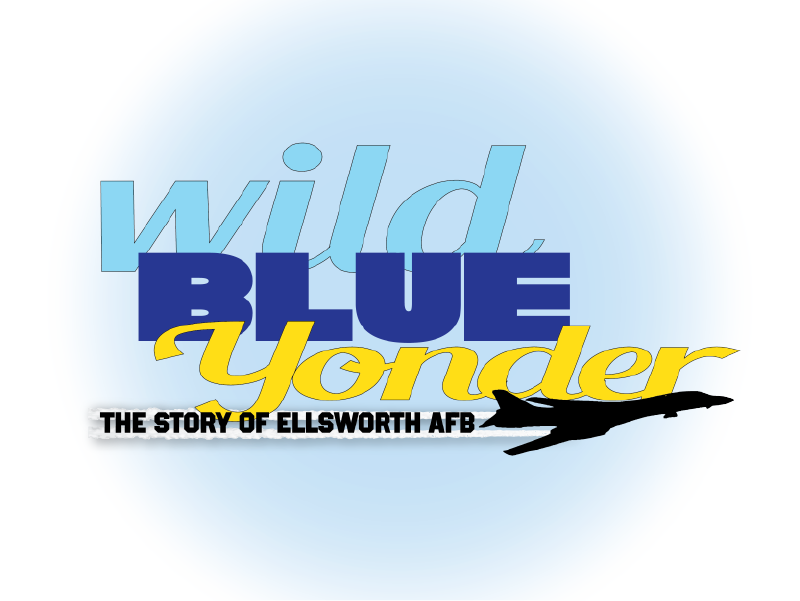 Beginning as Rapid City Army Air Base in 1942, Ellsworth AFB, re-named after Brigadier General Richard Ellsworth in 1953, experience the lasting impact of the base in the Rapid City community.

Take your picture with Bismarck, the base dog and design your own Air Force emblem! From the Cold War era to present day, explore the storied past of South Dakota's only military base. Learn more about the Minute Man Missile facilities, B-1 Bombers and everything in between.

This exhibit was in partnership with Ellsworth AFB, the South Dakota Air & Space Museum and The Journey Musuem & Learning Center. 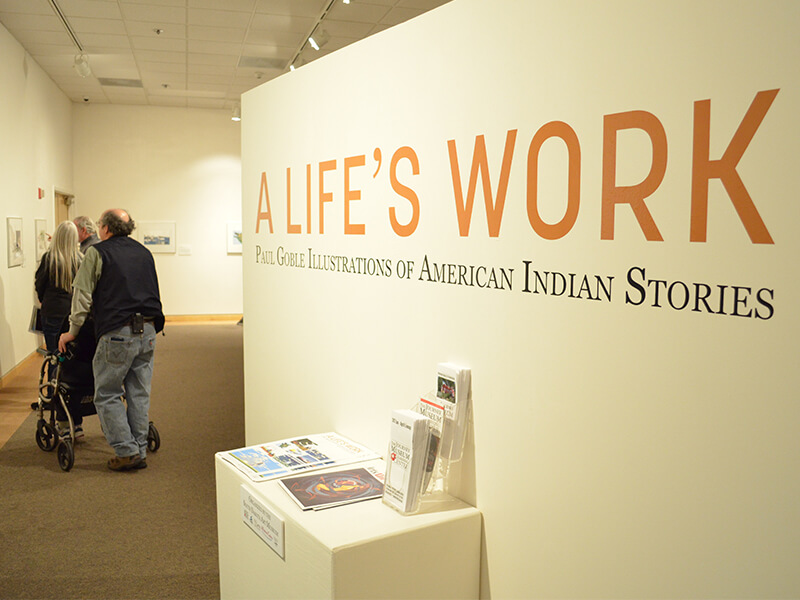 Author and illustrator Paul Goble was born in England on September 27, 1933. He grew up in a family where art and literature were valued and promoted. He also grew up with a deep fascination for the indigenous peoples of North America. As a young man he made several visits to the United States to spend time on reservations in South Dakota and Montana. He moved to America permanently in 1977 and became an American citizen in 1984.

Throughout his career, Goble garnered countless awards for his writing and artwork. In 1979 he received the Caldecott Medal, which is one of the most prestigious awards in all of children’s literature. Goble’s Caldecott winner, The Girl Who Loved Wild Horses, is just one of over 40 books in a career extending back to his first title, Red Hawk’s Account of Custer’s Last Battle, published in 1969. Throughout his long career, Goble focused on Plains American Indian history and retellings of traditional American Indian stories.

Award-winning Lakota author and illustrator S.D. Nelson says, “Paul Goble has a good heart. His paintings and his storytelling honor Lakota ways. Paul Goble, with his artistic insights, has shared our Lakota tradition and spiritual teachings with the world in a positive way. He is a true friend of our people.” Like Nelson, world-renowned Lakota flute player and hoop dancer, Kevin Locke, is an enrolled member of the Standing Rock Sioux Tribe. In a letter to Goble Locke once wrote, “You’ve done more to heighten an awareness of our culture than just about anyone I can think of.”

Although Goble’s artwork is scattered throughout the world in private and public collections in art museums, the primary resource for access to works representative of his career is in Brookings, South Dakota, at the South Dakota Art Museum. The museum’s extensive Paul Goble Collection consists of over 500 watercolor, gouache, and ink illustrations.

In a career spanning almost 50 years, Paul Goble dedicated his life and talents to showcasing American Indian stories. The purpose of these educational activities is to augment the exhibit “A Life’s Work – Paul Goble Illustrations of American Indian Stories.” The intention of the art exhibit is to celebrate the life and work of Paul Goble. The exhibit and educational programming are also intended to unite communities by bringing people together to enhance learning while looking closely at his images and sharing their perspectives.

This traveling art exhibit was a celebration of Goble’s life and career. The exhibit represented a small collection of his complete works but it provided visitors with the opportunity to enjoy artworks from different books and from different stages of his career. Art museum visitors were invited to enjoy Goble’s paintings and to witness for themselves the products of a scholarly commitment to accurate research, an abiding passion for art, and deep love for the people and cultures of America’s Great Plains. It has truly been his life’s work.

This art exhibit was a collaboration with the South Dakota Art Museum and The Journey Museum & Learning Center. 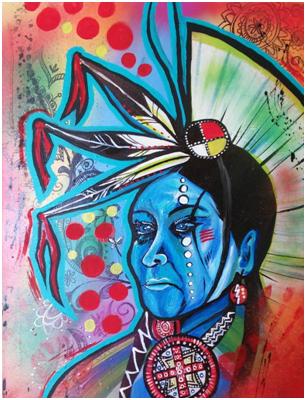 Tammy Eagle Hunter is a Lakota artist who uses bold colors and imagery to convey a message of cultural strength and resilience.  Born and raised on the Cheyenne River Reservation, Ms. Eagle Hunter currently resides in Eagle Butte, South Dakota.  As the Youth Programs Director of the Cheyenne River Youth Project, she works with children to bring art into their daily lives.

A self-taught artist, Tammy developed her artistic techniques through trial and error.  She sees her artistic development as a lifelong journey in which she is constantly fine-tuning her artistic vision and developing new skills and techniques.  Working primarily in acrylic paint on canvas she often incorporates spray paint and graffiti into her artwork.  Some of these graffiti techniques were borrowed from the young people that she works with at the Cheyenne River Youth Project. Spontaneity is a key element of Eagle Hunter’s work.  She often begins a painting with no preconceived notions about the subject matter, preferring instead to allow ideas to flow naturally onto the canvas.  Through her artwork, she hopes to remind the children in her community of the strength, resilience, and honor found in Lakota culture.

Tammy’s artwork has been featured at the 2016 Native POP: People of the Plains – A Gathering of Arts and Culture Market and she was awarded first place at the 2015 Cheyenne River Sioux Tribe Labor Day Artist Market and Exhibit.  This exhibition marked the first time her works have been shown in a museum setting.

Long ago, a Lakota woman married a mysterious man who turned out to be a star. She went with him to his sky home and soon was pregnant, but her loneliness for her relatives was almost unbearable. Seeing a plant that reminded her of an edible root, she dug it up, which opened a hole in the sky through which she could see her relatives on the earth below. Determined to visit them, she braided a long rope and climbed down it toward earth. But the rope was too short, and she fell to the earth and died. Her husband, in sorrow, sat down and hasn't moved since. He is the North Star. Miraculously, their son was born alive. He was raised by an elderly woman who named him Wicahpi Hinhpaya. He did many good deeds for Lakotas before returning to his father's home.

The narrative is divided into seven passages, each of which is creatively interpreted by four types of artworks - a 3D artwork, a song, a painting, and a poem - thereby creating seven "vignettes". These vignettes recount the Tapun Sa Win narrative using 28 new artworks by distinguished and emerging contemporary Lakota artists.

This exhibit is a partnership of the Center for American Indian Research and Native Studies (CAIRNS), The Journey Museum & Learning Center, and the Rapid City Area Schools' Office of Indian Education. 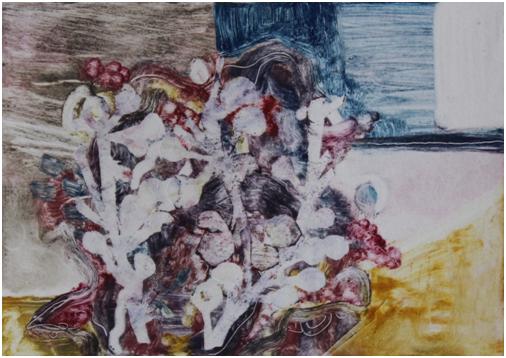 Renelle White Buffalo, an enrolled member of the Rosebud Sioux Tribe, was born and raised in South Dakota.  She holds a Bachelor of Fine Arts Degree from Iowa State University.  Currently, she resides in New York City, where she works full-time as a professional artist.

She creates a broad range of works, including paintings on canvas, monotypes, and mixed media sculptures.  Her color palette is often drawn from the environment around her.  Currently, she is experimenting with colors inspired by her recent residency at the Jentel Foundation in Banner, Wyoming.  Both the natural and cultural history of the South Dakota prairies provide her with additional inspiration for her work.  In her paintings, Renelle transforms traditional Lakota symbolism into contemporary abstract artwork, allowing the composition to create a cross-cultural conversation. The bold and confidently layered brushstrokes of acrylic paint incorporate personal meaning and connections to her Native American roots.  Her work challenges the stereotypes and redefines the perceptions of being indigenous today, both on and off the reservation.

Renelle’s work has been exhibited in numerous venues, including the Blue Rain Gallery, Santa Fe, New Mexico, the Exposure Gallery, Sioux Falls, South Dakota, and Northern State University, Aberdeen, South Dakota.  This exhibition marks the first time her works have been shown in a museum setting.

Prices for the artwork can be obtained by contacting The Journey Trading Company at (605) 394-2201.  To purchase artwork after the exhibit closes, please contact Renelle White Buffalo through her website.

Passage of Wind and Water - A Community's Journey 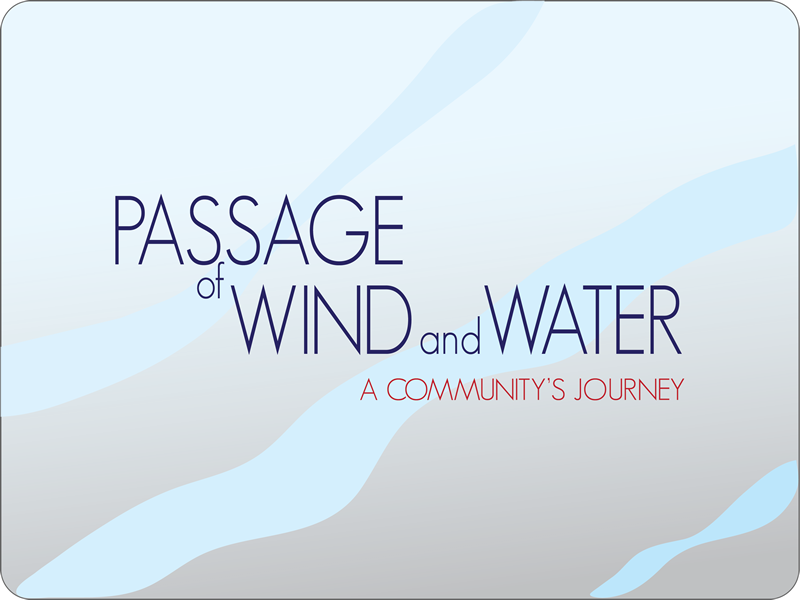 This unique visual experience celebrates the completion of Masayuki “Yuki” Nagase’s five year project detailing the transformative history of our area. Yuki’s creations make up the heart of a revitalized downtown neighborhood known as Main Street Square. In the words of Nagase, "“together, this granite composition brings to light the life and promise of this community’s past, present and future.”

Sculptor Masayuki Nagase views public art as an opportunity to develop long-term meaningful dialogue and connections among space, community and art. Nagase’s work is inspired by the essence of nature and natural forms. His preliminary design for The Sculpture Project: Passage of Wind and Water was based on his experience of the beauty and power of nature in the Black Hills and Badlands of western South Dakota. Nagase first visited the area 30 years ago and said the memory of its beauty drew him to apply to be The Sculpture Project artist.

Black Hills State University photographer Steve Babbitt was tasked with the mission to capture Yuki's project through the lens of a camera. In doing so, the Journey Museum and Learning Center is proud to display over 25 one-of-a-kind photographs as part of the exhibit.