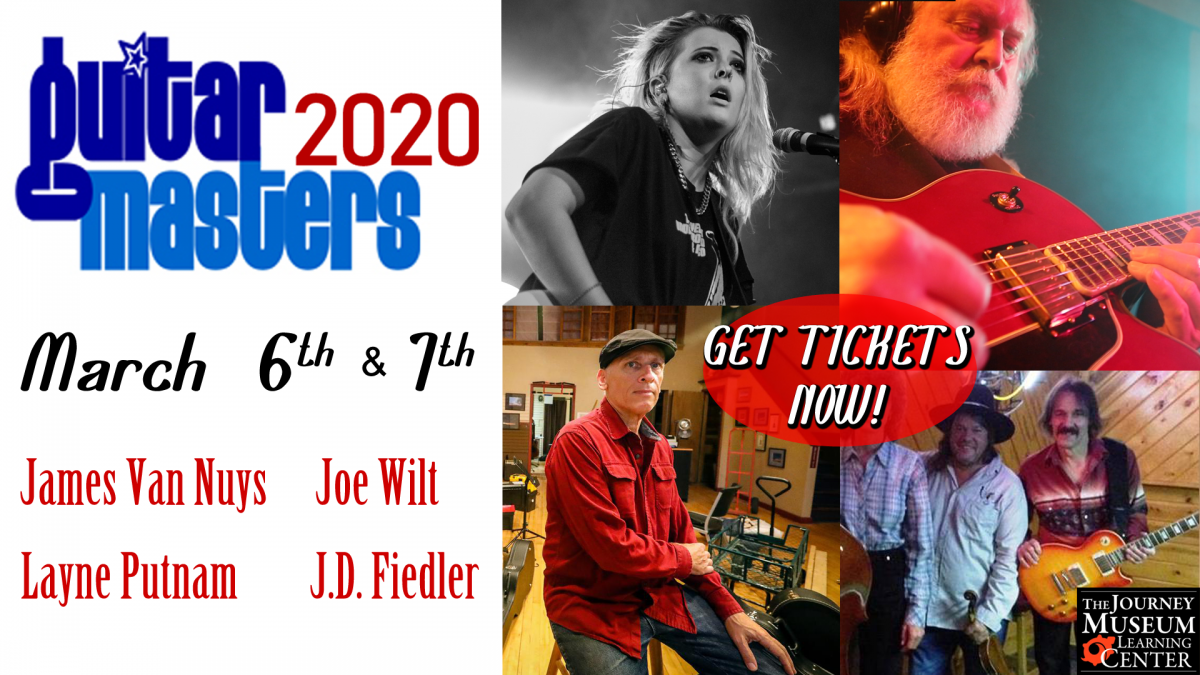 Backroom Productions returns to The Journey Museum and Learning Center with the Guitar Masters series on Friday, March 6 and Saturday, March 7 at 7 p.m. Four guitar masters will play in a round-robin style concert in The Journey’s Wells Fargo Theater. The doors open at 6:30 p.m. There will be one intermission. Beer, wine and other refreshments will be available for purchase on the nights of the show.

Proceeds from the concert will benefit the Readiatrics Book Drive and the Dacoda Instrument Drive. Both programs operate under the umbrella of Backroom Productions. For more information on the concert call Darla Drew Lerdal at 605-341-5940.

General admission tickets are $18 in advance and $20 at the door. Pre-sales end at noon on both days. Tickets are $10 for children and for high school and college students who have a school ID. Call The Journey Museum and Learning Center at 605-394-6923.

J.D. Fiedler is a familiar name to area guitar connoisseurs but comes to the Guitar Masters stage steeped in the blues of Chicago. He’s also performed in LA on Dick Clark’s “American Bandstand.” He did recording sessions for songwriters Tommy Boyce and Bobby Hart. After the bright lights dimmed, he studied as a chef in Paris and then found his home in the Black Hills. He has been following a jazz path for the past 10 years with jazz quartet Swing Shift and with Gypsy Jazz group Les Singes Volants.

James Van Nuys is not new to the Guitar Masters stage. Beginning at the age of 14, Van Nuys has taken a long, guitar-laced trip to become one of the Black Hills premier guitar finger pickers; his repertoire covers a variety of folk, blues, Irish and ragtime music. His original music incorporates influences from Renaissance, Baroque and Classical music. When not doing solo shows, he plays in duos with other instrumental masters.

Layne Putnam grew up in Rapid City with a last name synonymous with music excellence. However, she has blazed her own musical path in LA. Putnam has the distinction of being the first woman Guitar Master. She has been writing, recording and producing her own music since she was 17 years old. Her latest EP is called “The Black Hills,” written over the past year and serving as “an introduction to LAYNE,” says Putnam. Within the EP, Putnam performed and recorded all the instruments on each track.

Joe Wilt is also a Guitar Masters newcomer, but he is no stranger to the lovers of guitar performance in the region. As a life-long member of the Wilt Brothers band, he honed his skills in honkytonk bars and venues in five states for the past 40 years. Wilt is an accomplished guitarist and pedal steel guitar player. He also plays banjo, trumpet and spoons, but will save those talents for another show. Along with the renowned Wilt Brothers, he plays in the Gypsy Jazz band, Les Singes Volants.